We’ve supported various crowdsourcing projects over the course of the last few years, from Tupiniquim to Bloombox to the Edinburgh Catering Co, but always the closest to our hearts has been the original Kickstarter run by the folks at Union of Genius.

Back in 2013, with a year of booming business behind them in Scotland’s premier soup cafe, it was time to make the move to a commercial kitchen, so that the soupy needs of the city could be more effectively met.

As owners Bruce and Elaine Mason announced at last Monday’s event at the Last Word Saloon, it’s time for another expansion, and with the lot next door to their current premises having recently become available there’s a pressing need to move quickly to secure it. 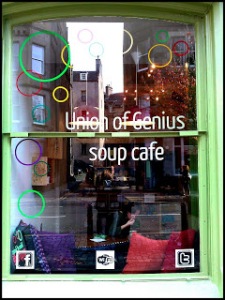 Accordingly, a new Kickstarter launched today and will run until 8 June.

Rewards range from soup recipes cards, to specially designed t-shirts, to year-long supplies of soup. The target figure is £10,000, which I’m confident is achievable given the huge goodwill that has followed the business throughout its existence.

Pop over to their Kickstarter page and make your contribution to this fabulous local business, which not only supplies more than thirty businesses across the city, but also works to support a number of charitable endeavours, not least the Real Junk Food Project.

We all need soup and we all need Union of Genius.

2 thoughts on “Back the Union of Genius #SoupStarter!”