In a most uncharacteristic piece of forward planning, we already have our August salon plans arranged and they are highly exciting!

We’re delighted to be taking the show on the road to the Biscuit Factory, just off Bonnington Road, where we’ll be introducing you to the joys of Dram & Smoke, on what for Paul and Nick, the chaps behind the venture, is something of a homecoming tour.

Following numerous sold out London projects, the local boys are heading north of the border for the Festival month during which they will take over the Biscuit Factory and transform the top floor into a wonderland of Scottish fare. 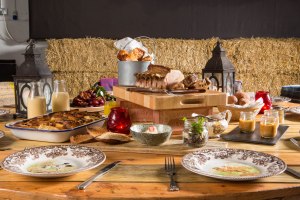 Dram & Smoke is all about championing the best of Scottish produce, with four courses served up family-style from an open kitchen, alongside well-sourced wine, Scottish beer, Naked Grouse whisky cocktails and a “solid playlist”.

There will be some other fun and games alongside live music performances plus a fully-stocked bar open until late.

Here’s a little video to give you further insight into what they’re all about.

Their August run begins on Friday the 5th, so we’re really pleased to be catching them early in their run with our event which will take place on Monday 8 August.

Book tickets for one of the 18 nights they are doing throughout the month, here. For the £40 fee, guests can expect a welcome cocktail and a four course menu packed with charm and elan.

We’re really looking forward to this August fun, so we hope you’ll join us for it.