When the folks at the Dundee Literary Festival asked us to bring Scran Salon to their festival, we were more than delighted to do so. 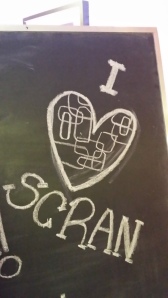 When the organisation of the event came together with ridiculous ease, entirely due to programme director Peggy Hughes’ swift action, I could relax and just focus on enjoying my day at the festival events and await the clock turning round to 8pm.

As is often the way with our events, I hadn’t previously met some of our contributors, so in the run up to showtime, I was able to get to know Fraser Reid and Morris Heggie, then renew acquaintances with July salon contributor Emily Dewhurst. 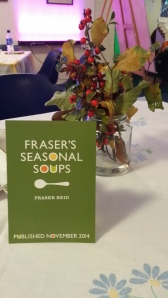 In addition to our three main contributors, we were delighted to have the massed ranks of the Clandestine Cake club in attendance. With Jac Meldrum, from Tinned Tomatoes, and Mr Cakeyboi to the fore, the bakers delivered an outstanding array of cakes for us to sample. The audience was more than appreciative, loading plates with the bakers’ favourite cakes. Delicious!

The irrepressible Morris Heggie got the speaking part of the evening underway with tales of the culinary heritage of those iconic residents of Glebe Street. Maw Broon’s Cookbook has been a runaway success, since first appearing in 2007. Morris regaled us with some hilarious tales. 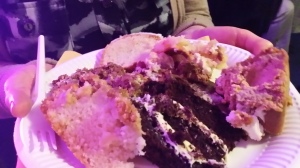 Emily continued things, giving us the background on Kitchen Press, a food book publishing house local to Dundee. She’s worked with some great local businesses, such as The Parlour, to create a signature line of cookbooks.

This led on very neatly to Fraser, from Fraser’s Fruit and Veg, on the Perth Road. Kitchen Press’s latest book is a collection of seasonal soups created by Fraser. What’s more, his shop sells specially selected ingredient bags to make it souper simple for you to make the delicious recipes. The audience was charmed by the tales of soupy delights.

All that was left was to say a few thank yous, then set people off with an idea to chew upon. I was recently at a Nordic Horizons event, where we heard about the cultural phenomenon that is Restaurant Day. I gave the audience the challenge of going and finding out about it and seeing what they could contribute to this year’s event on 15 November. In turn, I challenge all of you to consider what you’re going to contribute.

The audience in Dundee was wonderful, so we’d be delighted to come back for another event, soon.