It was a great pleasure to convene the latest Scran Salon shindig, once more at Akva. I’m really starting to think of the venue as our new home base, although it’s back on the road for next month – more of which later.

First up we had Susan, Chief Hulagan of the magnificent Hula Juice Bar & Gallery, along with Hulachef Lucy. They told us about the Hula ethos and fantastic fresh food for which the business is renowned.

They’re on the cusp of launching a new menu which will keep on the fresh and zingy track but take things in bright and delicious new directions. They showcased the raw and allergen-free cakes from Grams, too. 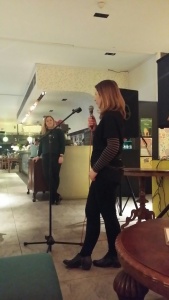 After people had appreciatively sampled the Hula delights, we had Will and Eleanor from the Edinburgh Larder telling us about the Edinburgh Food Social. They are mid Crowdfunder to get this exciting project on the road. Working with amongst others Bite Magazine’s Sharon, in her role as community councillor in Rosyth, this great endeavour will engage our young people in building a healthier food culture. Get backing the project immediately.

Finally we had a returning hero in the shape of Claudio, formerly of Zomato but now of ResDiary. He introduced his new boss Mike Conyers, CEO and founder of the company. He shared their story and future plans. It was interesting to hear that they have Andy Hayler, a hugely influential restaurant reviewer, involved.

Then in a bonus extra treat we had Steph from the Slow Food Youth Network telling us about the plans to switch next month’s Scran Salon to Thursday 7 April to accommodate some visiting food enthusiasts from the Netherlands.

That event will take place at Noir on Palmerston Place, so sign up to come along, here.